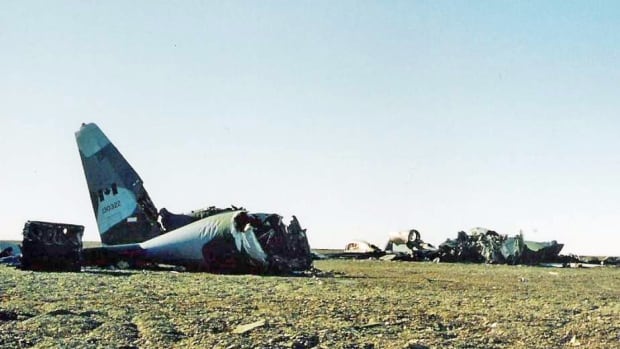 The crashed C-130 Hercules from Operation Boxtop 22 still rests on the Arctic tundra. It was photographed by the RCAF in the summer of 2016. (DND/Jill St. Marseille)

The Federal Court of Appeal has rejected the case of a former civilian defence employee left paralyzed 25 years ago following a military transport crash in the Arctic.

Bob Thomson, whose ordeal was made into a movie in the mid-1990s, has pleaded for years with Veterans Affairs and its appeal body to be treated the same as those in uniform.

His request — for the same benefits and entitlements as those given to military members — has been denied repeatedly.

Thomson took the case to Federal Court, arguing discrimination, but was rejected in 2015.

The appeal court justices upheld the ruling, saying his Charter rights were not violated.

The written decision was recently posted online, but it was rendered on Oct. 19, almost a quarter century to the day after Thomson was injured. The crash of air force C-130 on Ellesmere Island in the Northwest Territories took place on Oct. 30, 1991.

Like the lower court judge, the appeals court justices had sympathy for Thomson and say the former manager made valid, compelling points.

"I agree with the appellant that there does not seem to be any principled reason to justify why he has been treated differently from so many others who are entitled to the benefits he seeks," wrote Justice Mary Gleason.

Until Parliament changes the law or cabinet amends regulation governing civil servants, Thomson remains ineligible for the same benefits as military survivors of the same crash.

"Indeed, it is probable that the failure to amend the (flying accident compensation) regulations to extend entitlement to allowances is simply an oversight," Gleason wrote. "If that is the case, it is to be hoped that any pleas the appellant might make to have the (flying accident compensation) regulations amended to afford him the benefits he seeks will be favourably received by the Governor in Council."

Thomson was left paralyzed following the crash and endured 30 hours exposed to the elements before rescue. He suffered multiple amputations because of frostbite.

The aircraft struck a rocky outcrop while on a resupply mission to Canadian Forces Station Alert. The pilot was apparently flying by sight, rather than instruments, when the aircraft went down 16 kilometres short of the runway.

The memorial to the victims of the crash of a C-130 Hercules on Ellesmere Island during Operation Boxtop 22 on Oct. 30, 1991. It was photographed by the RCAF in the summer of 2016. (DND/Jill St. Marseille)

Five of the 18 people on board were killed. There was only one other civilian, Susan Hillier, among those rescued.

The tragedy was made into a television movie two years later. The film, titled Ordeal in the Arctic, based on the book Death and Deliverance, starred television actor Richard Chamberlain as the pilot, Capt. John Couch.

Following the accident, Thomson was compensated for his injuries under the Flying Accidents Compensation Regulations and awarded a pension by Veterans Affairs.

But he was denied entitlement to a stipend known as the Exceptional Incapacity Allowance, which is given to military members.

Thomson, who managed retail outlets for the military, argued that civilians such as himself faced discrimination by not being on the same footing as military members involved in the same accident.

Earlier this year a memorial cairn was airlifted to the crash site by the air force, which wanted to mark the 25th anniversary of the event.

Dignitaries and some of the survivors took part in a service on June 20, 2016, taking advantage of the relatively calm summer weather. They had a chance to inspect the wreckage, which still litters the tundra.

"We got to say goodbye again to the five guys who didn't make it," Master Warrant Officer Tony Cobden, one of the survivors, told a military film crew.

In a statement, the head of the air force, Lt.-Gen. Mike Hood, said the site is a reminder of the remoteness and risks of operating in the Arctic.

"We and the families and friends of those who died still grieve. Survivors bear their scars," he said.