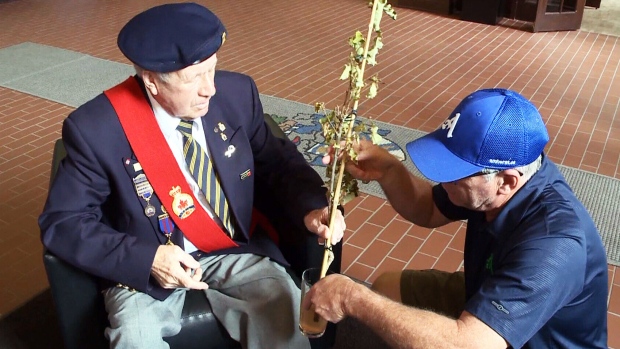 A tree planted to honour Canadian soldiers who sacrificed their lives in the Battle of Vimy Ridge was torn from its roots and snapped in half in a Nova Scotia town, angering a local veteran and prompting questions about the act of vandalism.

Hundreds of Vimy oak saplings have been planted across Canada to honour the 100-year anniversary of the First World War battle, where more than 10,000 Canadian troops were injured or killed.

The little trees come from cuttings that share a lineage with an oak tree found in a barren Vimy field back in 1917.

One of those saplings was planted in August in a park dedicated to veterans in Amherst, N.S.

In early September, the tree was found uprooted and snapped in two pieces. The town’s recreation director, Bill Schurman, said the prognosis was bleak.

“We immediately put it in water hoping, just hoping, that maybe we could try and save it,” Schurman told CTV Atlantic.
But a local horticulturalist analyzed the sapling and determined that it was too late.

For Jack Perry, an 86-year-old veteran living in Amherst, the unexplained act of vandalism is enough to bring him to tears.
“For somebody to do something like this, to mock our heritage, it’s unbelievable. I’m sick to my stomach,” Perry said.

The Amherst Legion has applied to the Vimy Oaks Corporation, which manages the trees, to receive a second sapling. The legion hopes to have a new tree planted by Remembrance Day in November.

Others in the community are similarly upset by the news.

“I think it was very disrespectful for all the ones that died during the war,” said Marguerite Hudson.

Perry said he’s determined to replace the sapling and hopes that, if another planting ceremony is held, that the culprits will attend to learn the significance of the little tree.

“I’ll forgive them as long as they know what they’ve done wrong,” he said.