Afghanistan memorial has been a long time coming 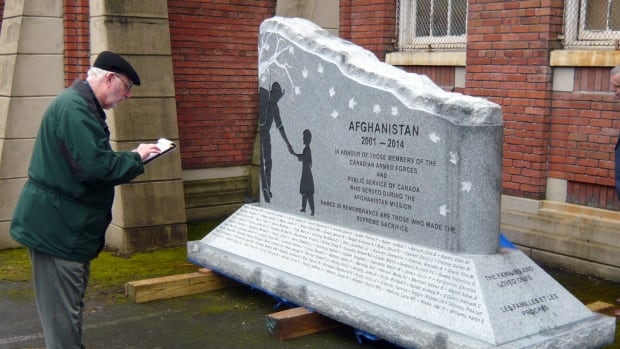 The moment Lt. Michael McCauley stopped to shake the hand of an Afghan child in southern Afghanistan in 2007 has been immortalized on a wartime memorial about to be unveiled in Victoria, B.C.

The 18,000 pound slab of granite was designed to honour the thousands of Canadian soldiers and a handful of civilians who served in Afghanistan between 2001 and 2014.

Lt. McCauley and his wife, both active members of the Canadian Forces, will travel from New Brunswick to attend the unveiling alongside fellow military members, veterans and Lt. Governor Judith Guichon.

The memorial's design was inspired by a photograph of Lt. McCauley shaking the hand of a local boy.

It was taken by Reuters photographer Finbarr O'Reilly in the then Taliban-held district of Panjwaii where a number of Canadian soldiers were killed in hard-fought battles that raged for years between the Taliban and Canadian Forces. 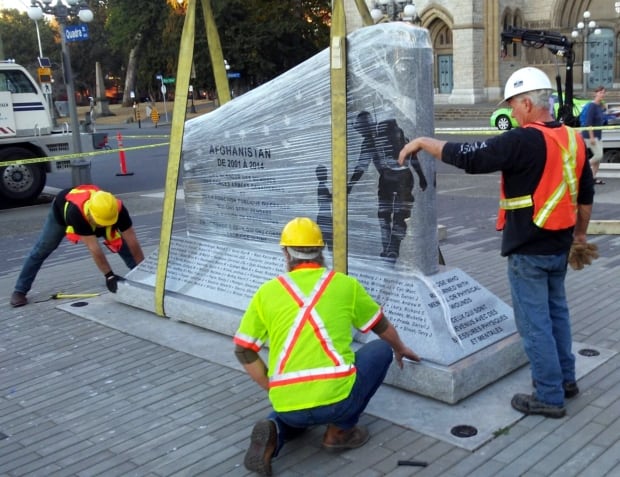 Moving and installing the 18,000 pound memorial required the use of a crane.

Despite months of effort, the Afghanistan Memorial Society couldn't identify the soldier in the image and had all but given up on learning the story of the handshake, when the media was given a sneak peek of the memorial.

That night when the story aired, the McCauleys were watching the news and immediately recognized the image. They got in touch with the society and introduced themselves.

The striking image is the visual focal point of the main part of the sculpture, but a closer look reveals the emotional focus: the 163 names transcribed into its base.

Those names represent 158 soldiers and five government-employed civilians who were killed in the war, including journalist Michelle Lang and diplomat Glyn Barry.

The sculpture also recognizes the injured and mentally maimed soldiers who returned home, as well as the families they left behind.

It will be installed on the grounds of the provincial courthouse in Victoria, near a new playground and in the same spot a tent city for the homeless once stood before it was taken down.

It was originally slated to be installed across the street, but the province offered up the space instead.

"The provincial government offered us this site which has better exposure quite frankly," said Larry Gozner, a retired brigadier general and current member of the Afghan Memorial Society.

The memorial will be officially unveiled Sept. 30, 2017, at the provincial courthouse in Victoria.

Members of the public are encouraged to attend and details can be found on the Afghanistan Memorial Society's website.

Afghanistan memorial has been a long time coming

On Saturday, the men and women who served in Afghanistan and lost their lives while fighting for the Canadian Forces, or working alongside them, will be recognized and honoured with a memorial of their own in downtown Victoria.

It’s been a long time coming, for the Afghanistan conflict was Canada’s longest military engagement.

Yet, Afghanistan veterans continue to be somewhat overshadowed in the area of memorials and remembrance, by veterans of the Korean War and Second World War.

It’s not hard to understand why: there were more soldiers lost during those conflicts, whose horrors remain as history’s examples of what to avoid, as humanity struggles to make progress.

Those veterans are also disappearing as they age and die and there’s a need to remember their sacrifices while they are still living and they can still teach us what war can do to a person.

The same can be said for the veterans of Afghanistan.

There were 135 soldiers and civilians killed during that conflict and in many ways the men and women who served are different than those from past wars.

They have either integrated back into their communities and jobs and not taken up a similar public role as their counterparts from the past. Or, they have assumed very public roles in another battle — against the government that sent them to Afghanistan in the first place, only to return with serious medical conditions, including Post Traumatic Stress Disorder. And because of society’s changes, and the fact that many soldiers still serve, you do not see a lot of Afghan vets on parade on November 11. That may change eventually, but for now it seems veterans from that war are not being added to many existing cenotaphs.

While a lot fewer Canadians were killed in Afghanistan than, say, the Second World War, the effects on many of those who did survive are serious and have changed people’s lives. Their health is a long-term issue facing Canadians in the years to come.

While a memorial will not change that, it is a way to recognize their sacrifices and, perhaps, even a way to ensure the conversation on how Canada treats it veterans, continues.