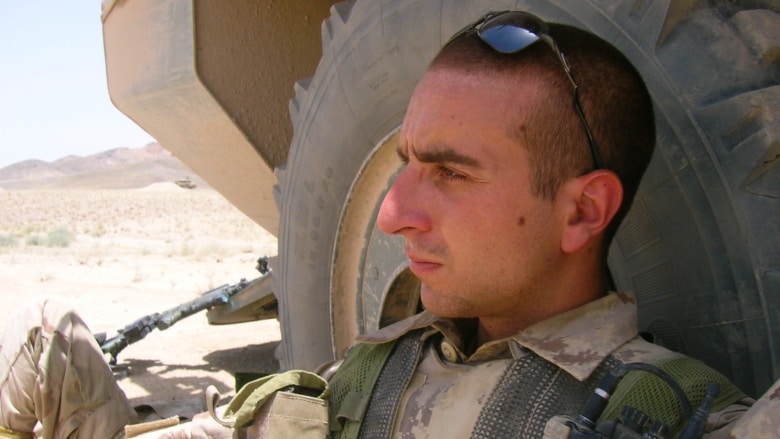 Master Cpl. Joseph Allina during one of three tours in Afghanistan before he retired from the military in 2016. The 35-year-old killed himself in July after struggling with PTSD. (Submitted by Sandra Weissinger)

In his heart and his mind, family say, he remained a soldier. After all, the military was where Allina had basically grown up.

During the previous 15 years, both at home and abroad, it was where he suffered the physical and psychological wounds which ultimately led to his retirement: injuries from a rollover while sandbagging the Assiniboine River; tinnitus from the guns of the infantry; post-traumatic stress disorder from one tour in Bosnia and three in Afghanistan.

His wife says a piece of paper with his name and address was found in Allina's effects after he killed himself in front of Vancouver's Seaforth Armoury on July 13.

He would have turned 36 the next day.

"It was how he wrote his name that really made an impact, because he wrote 'Master Cpl. Joseph Allina, CD Retired,'" says Nadine Allina.

"Even through everything and his dissatisfaction with being forced out of the military, he still considered himself a soldier."

'Tired of being tired'

Allina's death throws a tragic spotlight on the struggle to care for increasing numbers of men and women being released from the military for medical reasons.

The Canadian Forces Ombudsman has called for greater support.

Prime Minister Justin Trudeau wrote of the need for a "seamless transition" from active to veteran status in his 2015 mandate letter to Minister of National Defence Harjit Sajjan. 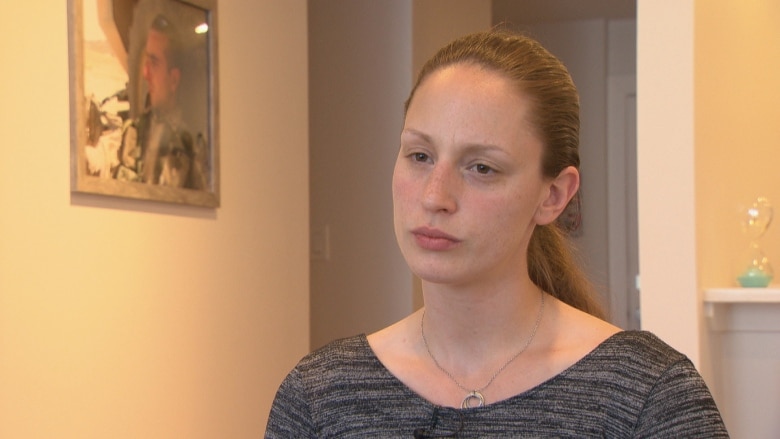 Master Cpl . Joseph Allina's widow, Nadine Allina, says her husband was medically released and forced to retire from the military in 2016. (Frederic Gagnon/CBC)

And last October, chief of defence staff Gen. Jonathan Vance said the military is redesigning itself to make sure troops who are not "deployable" are still "employable."

But none of those words, wishes and strategies would save Allina.

Loved ones say he fell into isolation and anger between navigating paperwork and appointments with counsellors and psychiatrists with whom he struggled to connect.

"He told us that he wasn't finished being a soldier," says his mother Sandra Weissinger. "He had a lot of experience both in and out of the country, and he definitely had a lot that he could still give. A lot."

Arthur Weissinger recognized the creep of PTSD as he watched his stepson Joe grapple with the disorder, well before an official diagnosis in 2013.

Originally from Alabama, the 69-year-old had lived it himself, decades earlier, on his own return from Vietnam. He served in the signal corps but saw considerable combat.

"I did, quite frankly, terrible things," Weissinger says, the drawl of his southern accent still detectable.

"When I got home, most of what I was was angry. I began to think I was just crazy. I would be angry. And I was afraid all the time. And it got worse and worse." 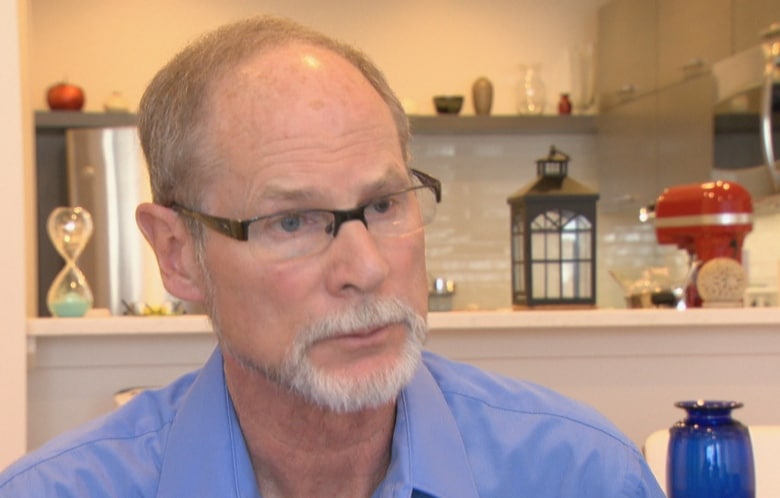 Arthur Weissinger recognised the signs of PTSD in his stepson Joseph Allina. Weissinger had his own battle with PTSD after serving in Vietnam. (Frederic Gagnon/CBC)

Arthur Weissinger says he tried to probe Allina without alienating him. Over the years, he saw him withdraw, become more serious. They spoke of what it feels like outside the military.

Knowing there are two kinds of people: those who have been there, and the vast remainder of the population — those whose freedoms you're fighting for.

Weissinger doesn't know exactly what caused his stepson's PTSD. But he does recall something Allina wrote in 2008, while he was on a tour in Afghanistan.

"He wrote to me a very short email basically saying 'How do you get over it when somebody who's really close to you gets killed?'" Weissinger says.

"I didn't know exactly what to tell him. I said first keep your head down, you don't want to get hurt too. And then you try to do your best to remember those people and know that they died doing what you're doing. They were trying to serve their country."

According to a 2016 report from Canadian Forces Ombudsman Gary Walbourne, 1,500 men and women are released each year due to illness or injury. Approximately 600 cases are directly related to military service.

Walbourne said many veterans face an uncertain future outside the military compounded by the complexity of their injuries and confusion around the delivery of services and benefits.

"Serving in the military is not just a job — it is a lifestyle," Walbourne wrote.

The government accepted all Walbourne's recommendations, proposing $1.6 billion in its last budget over the next three years to shore up the long-term disability benefits plan for medically released members.

But just this June, Walbourne found that only one of his suggestions had been partially implemented — the development of a secure web portal.

'We all aim for zero'

But Courchesne says her department has a different set of challenges to the "closed society" of the Canadian Forces.

"We don't provide care directly to veterans. They live in Canadian communities. They have their own lives. And if there is a death, unless we are notified, we don't know." 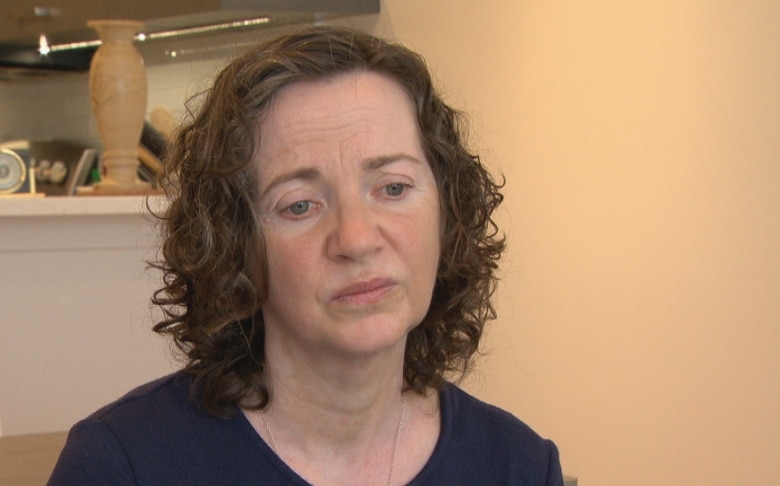 Joseph Allina's mother Sandra Weissinger says her son told her he wasn't finished being a soldier when he retired for medical reasons in 2016. (Frederic Gagnon/CBC)

"Suicide is sometimes the outcome of mental health disease," she says.

"It doesn't mean that the system has failed them. But we continue to look for solutions to understand and put everything in place. We all aim for zero. No doctor wants to lose any patient."

'He knew I would have stopped him'

The Weissingers want individualized treatment for veterans, more contact with families and a greater attempt to keep members within the military family unless they're truly prepared to leave.

They say Allina was good at hiding his problems. He wanted to protect others.

https://i.cbc.ca/1.4772369.1533250077!/fileImage/httpImage/image.jpg_gen/derivatives/original_780/joseph-allina.jpg
Joseph Allina struggled to cope with both physical and psychological pain on his return to civilian life. But his family say everyone thought he would be okay. (Submitted by Sandra Weissinger)

"There were enough moments when Joe was happy and Joe was himself that I think everybody thought that Joe was going to be okay," says Sandra Weissinger.

On the day he died, Allina went to Starbucks to get his wife a drink while she lay in bed. She went to work and he went about his normal routine.

Her heart goes out to any civilians who she fears may think they could have intervened.

"I'm worried that they're feeling guilty," she says.

"In this situation, I know we're all feeling a little guilt but really, we are guiltless. It is the system that failed him."

Where to get help: